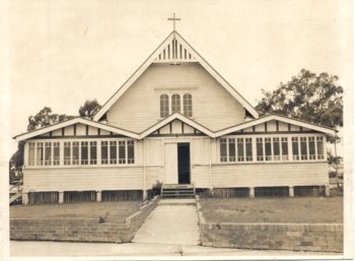 Camp Hill and Whites Hill are known to be within the area where the original inhabitants of this land, our aboriginal brothers and sisters lived. Early history from Mr W.H. Greenfield, a resident of the area in 1890, records a time when the area was bush and the aboriginal people camped on the sides of Whites Hill.  This was known to them as “Boolimbah” meaning ‘place of the magpie-lark’.

The Murri ministry representative spoke of sacred pathways of the people across the site upon which the church is built.

In 1916 Archbishop Duhig purchased 22 acres of land at East Coorparoo from Mrs Maloney, the sister of TJ Byrnes, Queensland’s first Catholic Premier.  Much was sold for subdivision and what remained includes the parish land on which the church and school with associated buildings and facilities have been constructed.  The titular saint of the church is St Thomas the Apostle who was the patron saint of Premier Byrnes.

Camp Hill Parish was centred in a wooden Church built in 1923.  The first church building was a wooden structure of just over 9 metres by 18 metres. When verandas were added on three sides it served jointly as church and school.  This dual role spanned eight years from January 1929 to January 1937 when the original two story brick school, (now much extended) was opened.

Weekly Mass was originally celebrated at 7.30am each Sunday morning by the priests from St. James’ parish at Coorparoo until the arrival in 1927 of Fr Arthur Perkins MSC, our first Parish Priest.

The development of parishes in Brisbane followed the growth of the popular suburbs and in November 1957 Archbishop Duhig blessed the foundation stone for the building we know now as St. Thomas’.  Archbishop Duhig returned in October 1958 to officially open the Church. In its issue of the following day the Courier Mail described the building as “airy, spacious and dignified…….one of the best examples of the new uncluttered and climatised religious architecture in Queensland”.

The Catholic Community has gathered here since then for Sunday Mass and celebration of the Sacraments, particularly Baptism and Marriage.

In 2008 St Thomas’ celebrated the fiftieth anniversary of the opening and blessing of our church building. During those celebrations we looked back with gratitude while it also provided an incentive to plan for the next 50 years of worship within our church.

In 2011 extensive renovations were undertaken on the existing Church in order to breathe new life into the building and also reinvigorate our worship space. The renewed Church was opened with a Mass of Solemn Dedication in August 2012.  In 2013 the Church renewal was completed with the installation of an artwork entitled ‘Thomas – called Didymus’ which was installed in the common ground between the school and Church.  The artwork is a modern interpretation of an original Brenda Bettinson artwork. 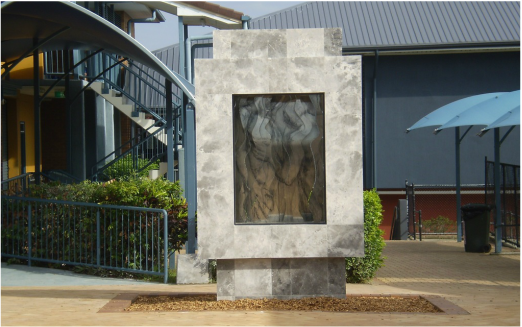